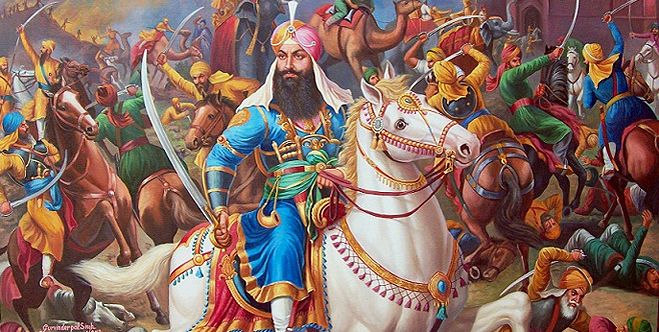 It was the 11th of March in 1783, when 3 Misls of Sikhs, Karorsinghia Misl, Ahluwalia Misl, and the Ramgarhia Misl joined hands to conquer Delhi’s Red Fort. The campaign was led by Baba Baghel Singh of Karorsinghia Misl and after the victory, he started the construction of historical Gurudwaras on sites associated with Sikh Gurus in Delhi. While he was involved in that, S.Jassa Singh Ramgarhia also participated in that for some time, and while returning, he uprooted the Mughal Imperial throne, where Aurangzeb once sat and ordered the beheading of the 9th Sikh Guru, Sri Guru Teg Bahadur. This throne was taken to Amritsar, the seat of Ramgharias. It was installed in the Ramgharia Bunga in the periphery of the Golden Temple, and still rests there. Maharaja Jassa Singh Ramgarhia was a great ruler, a skilled engineer and a great general. Punjab was divided into 12 Misls until Maharaja Ranjit Singh came and united all of them to form one country. These misls collaborated with each other from time to time, to protect the area from invaders like Abdali and even Mughals.

While reading about the glorious history of Maharaja Jassa Singh Ramgarhia, one question that popped into my mind was about the memorial (samadhi) of Maharaja Jassa Singh Ramgarhia. I have read nearly 20 books so far, written on his life by different authors. While most of them mention that after the demise of the Maharaja in 1803, his memorial cenotaph (Samadhi) was built by his son S. Jodh Singh (1757-1816), near the bank of river Beas in his capital of SriHargobindpur, which was washed away due to flood sometime later, leaving no trace behind. Only one research scholar, S. Kehar Singh Matharu (Canada), in his book “Maharaja Jassa Singh Ramgarhia” (2016) mentions this samadhi on page 178. Although, the information provided in the book was insufficient to disprove the false claims made by several other authors, it was important enough to inspire me to start my own research. I was able to contact Sh. Matharu and he was kind enough to guide me through his part of journey and set my course. It is pity, that instead of indulging in fresh research, all other authors relied on some old flawed narrative and continued to write that the samadhi was flooded in the river.

This also bothered me because we know that S. Jodh Singh, besides being a great warrior, was also a skilled engineer like his father. How can he make the mistake of erecting a memorial in the flood zone of a fierce river?

SriHargobindpur is a historic city on the banks of river Beas, in the Gurdaspur district of Punjab (India). The land for this was purchased by 5th Sikh Guru, Sri Guru Arjan Dev Ji in 1587 from Rohillas. It was named Gobindpur at that time. Later, after his martyrdom, the town was captured by the Chandu’s relative with the support of Mughals. Chandu is the same Mughal Noble, who was instrumental in bringing the 5th Guru to his martyrdom. It was liberated by the 6th Sikh Guru, Sri Guru Hargobind Ji in 1629. The Guru then constructed a mosque for the Muslims and a Temple for the Hindus in the town. There is also a beautiful Gurudwara constructed later in the honor of the Guru. When the Guru liberated this town, the devoted sikh families started to settle here and the population of the town grew to 4000 and since then, it became famous with the name of SriHargobindpur.

After conquering Jalandhar Doab, Riarki, and nearby Hill kingdoms, S. Jassa Singh Ramgarhia started planning for a more stable empire and a full-fledged capital. Sri Hargobindpur was a perfect location from all aspects. It was at the optimum height from the river, had scenic beauty, and also safer than other towns, given its geographic situation. He then fortified the town, with 5 gates and made it the capital of his kingdom. As per a few records, by this time, the population of the town had reached nearly 20,000.

In February 2019, I made my maiden visit to this town and explored many historic landmarks. I also walked along the bank of river Beas. A few buildings inside the town exist but in dilapidated condition. Palace and Court of Maharaja Jassa Singh Ramgarhia still stand, but a portion of Baradari and few rooms have caved in. Some structures are being restored now.

Along the bank of the river, there was no trace of the Samadhi. One major question that was bothering me that how can they construct the Samadhi of Maharaja outside the walls of the capital, against the medieval practice, and that too at the site, which was prone to frequent natural calamities. Perhaps, there is something that was not explored properly or is still hidden from researchers.

The next day, I started exploring the streets of the fortified town. While roaming around, I stumbled upon an octagonal domed structure, some 300 yards eastwards of the Lahori Gate. It was inside a courtyard, locked from outside. I couldn’t see much from there, but the neighbors defined the building to me. I returned to Amritsar and started reading about samadhi architecture.

In a couple of months, I returned to the site with more information on the Samadhi architecture in this belt. This time, another learned person from the town accompanied me to this compound. Luckily, we found the gate open. As we entered, the samadhis built in Punjab (both India and Pakistan) started flashing before my eyes. This building was exactly the same.

For several years, the family of Gauri Shankar is living in this compound. But they do not possess any legal documents for the ownership. Within this compound, in a corner, we have this octagonal building in a 15’ X 15’ block. The walls are 12’ high and have a dome on top of it. The building is made of Nanakshahi bricks and contains stone jalis on each side. Arches and decorative elements on the wall exhibit the excellent craftsmanship of the era. Each wall is about 3’ thick and the building has a single door on one side. Walls also have alcoves in them. To the right of the door, there is a tiny staircase leading to the upper level, which has an opening in the middle of about 3’ diameter. The stucco work on the exterior is almost gone and building up to 4’ from the ground is crying desperately for restoration.

In front of this octagonal building, at a distance of some 15’, there is a small well, which has been excluded from the compound with a low boundary wall. The well is also of small nanakshahi bricks and has an empty cavity, which at one point of time, contained a slab bearing the name of Maharaja Jassa Singh Ramgarhia. Some people informed me that a while ago, few men vandalized the slab and one major reference to the site were lost forever. Following is the drawing of the layout of this Samadhi.

This building is neither a gurudwara nor a palace. It matches the Sikh Tombs built in Punjab, on both sides of the Indo-Pak border. For example, the memorials in Pothohar in Pakistan. The area of Fateh Jung village contains few cenotaphs/tombs, which has artwork on the inside. In the Maha Singh Bagh of Lahore, we have the Samadhi of Sardar Maha Singh father of Maharaja Ranjit Singh. Near the Baradari of Lahore, we have the Samadhi of Maharaja Sher Singh. In village Mangat, district Mandi Bahauddin, Pakistan, we have the Sikh Samadhis. In India, we have Samadhi of Shahid Baba Mangal Singh in village Mughal, District TaranTaran, Punjab. Also, the tombs of the Sodhi family in the Guru-Harsahai area of Ferozpur. The samadhis of General Fateh Singh (from the army of Maharaja Ranjit Singh)and his family in Amritsar. Samadhi of Bhai Desa Singh near Gurdwara Baba Atal Ji and Samadhi of S. Jodh Singh son of Maharaja Jassa Singh Ramgarhia inside the compound of Gurdwara of Baba Deep Singh Ji at Amritsar (in pic). All these are perfect examples of the Sikh Samadhi architecture. Even the memorials of Baba Atal Jee and Baba Deep Singh jee in Amritsar are octagonal and small. Later larger Gurudwaras were constructed around them.

(Samadh of General Fateh Singh, Amritsar, and imagery inside it)

It is a matter of consideration that S. Jodh Singh Ramgarhia, being a skilled engineer, cannot choose a site in the flood plains of a river for the construction of his father’s memorial. History suggests that even S. Hari Singh Nalwa used to consult him while making forts and check posts at Jamrud, Pakistan.

Memorials of other family members of the Maharaja Jassa Singh Ramgarhia have already been traced to sites, where they died. Maharaja Jassa Singh Ramgarhia was the only person to die in SriHargobindpur in 1803 A.D. and therefore, his tomb has to be within the walls of the city. Since this is the only building that exists, matching the tomb architecture, it has to be the building, that the Ramgarhia community has been looking for.

I would urge the government machinery and private organizations, or individuals, who care for heritage, to step up and try to save this historic structure. Even a little more delay can result in permanent loss of this piece of heritage.